Picking the right motherboard can be a nightmare because this part defines most of the other components in your custom PC build.

There are many choices to consider just in terms of one CPU generation. In our case, CPUs based on the LGA 1150 socket.

In this guide, you will become more familiar with what aspects to consider when choosing an LGA 1150 motherboard including which CPUs and RAM modules you can use with them. We’ll also cover some of the best LGA 1150 motherboards in our reviews and buyer’s guides.

There are three very important things to consider when using a mobo based on the LGA 1150 socket. CPU and RAM compatibility is essential, and any possible differences between Z97 and H97 chipsets should be considered for getting the most out of your hardware.

The LGA 1150 socket was made available in 2013 for the contemporary, fourth and fifth-generation Intel Core CPUs. Generally, these are Haswell and Broadwell CPUs that have 2 to 4 physical cores, support for dual-channel memory and PCIe 3.0.

While we cover different types of CPUs, you as a gamer should only consider the i5 and i7 CPUs since all others are typically intended either for servers or low-end office and media PCs.

Intel’s most recent chipsets in the Haswell and Broadwell family are the H97 and Z97. The only noticeable addition compared to the previous H87 and Z87 chipsets are PCIe-M.2 support, which isn’t too important for gamers since many motherboards don’t have such slots.

If the answer to either question is yes then, you will have to buy a mobo with Z97. Otherwise, you can stick to the cheaper ones featuring the H97 chipset.

The two chipsets mentioned above support a maximum of 4 DDR3 DIMM slots, but actual amounts can vary per motherboard.

Dual-channel is available, so you should always pair and install two of the same modules together (e.g., 2x 8 GB DDR3-1600). Buying two sticks of RAM that are the same, at the same time, will help prevent RAM related issues.

The technology supports all available frequencies, but what actually works will depend on the specific motherboard that you choose. Always read reviews and specifications before purchasing DDR3 RAM for your motherboard. 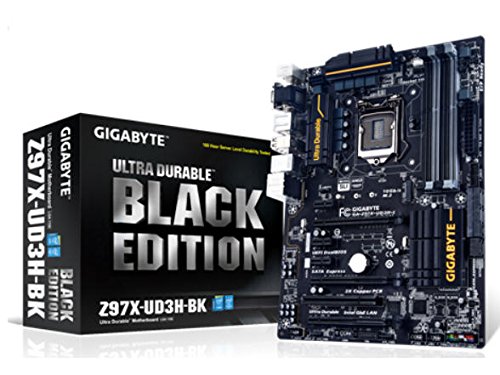 I think the Gigabyte GA-Z97X-UD3H-BK is one of the best 1150 motherboards on the market thanks to its extensive feature list. However, it might be considered expensive for those on a budget and can be difficult to find locally.

It has a good foundation for future upgrades including 4 RAM slots, lots of PCI-E slots and a good amount of supported CPUs makes it easier build a high-end gaming PC over time.

This board can also pack a lot of storage. With one M.2 PCIe connector, it can utilize a super-fast SSD. Unfortunately, that will disable the SATA 3 4/5 connectors, but you can still use the first two to install HDDs. 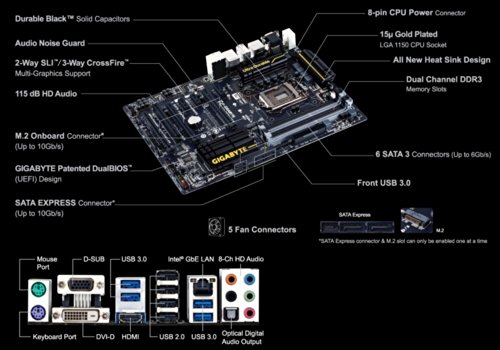 Game simulator players with various USB-based input devices, and VR users have ample space to plug in their devices. There are 6 USB 3.0 and 6 USB 2.0 ports are available, so using a good PC case with 2 USB 3.0 / 4 USB 2.0 in the front should be used with this motherboard.

The built-in Realtek audio chipset supports 7.1 surround sound by utilizing 10 DAC channels. To be honest, there is no reason to buy a sound card with today’s boards.

I recommend updating to the latest BIOS version when you purchase any board using official software and updates. While not perfect, Gigabyte’s DualBIOS technology can reduce motherboard bricking issues caused by failed UEFI updates.

All in all, high-end gamers and VR enthusiasts might consider the Gigabyte Black Edition 1150 motherboard for its upgradeability and available connectors and ports. 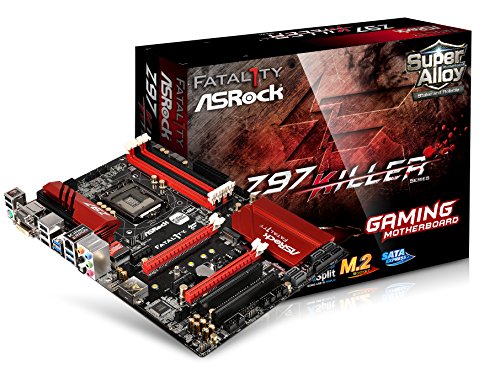 If you are a fan of AMD graphics cards and want to utilize CrossFire, then the high-end ASRock FATAL1TY Z97 KILLER motherboard might be a good choice.

Again, this board is not for small budgets and is ideal for unlocking the full potential of “k” CPUs. For those two reasons alone, I would recommend this board for higher-end gamers.

If you only have a single NVIDIA graphics card, contrary to rumors, it works fine. The issue is that dual-card SLI is not supported.

The board’s shape and layout are a bit different because it is narrower than most others. The SATA ports are placed parallel with the PCIe slots. This is unlike most other motherboards where the SATA connectors are rotated 90 degrees.

The 2x 6 USB 3.0 and 2.0 ports are enough to take on VR or any simulator related peripheral, and the LAN slot can handle an Internet connection up to 1 Gbit.

While the board supports almost any kind of DDR3 RAM, you should be very careful if you want to use 32 GB RAM. This board is very picky about latency timings. Tighter ones tend not to work properly.

If you only plan on using 16 GB of RAM then this is a non-issue, but something you might consider if you are looking to upgrade in the future.

And the final selling point for the ASRock z97 motherboard is that it supports RAID 0, 1, 5 and 10 so you can build a reliable and durable storage setup for your data using multiple HDDs.

Because the ASUS z97-E supports USB 3.1 and both NVIDIA SLI and AMD CrossFire, it makes it a good choice for fans of either.

This board has similar features to its competitors including M2.0 and SATA Express connectors, Gigabit LAN, RAID support and a fairly standard audio chip. Only the USB 3.1 support makes it stands out from the crowd.

ASUS provides an auto-overclock feature to make it easier for new users. However, it is a bit aggressive and can sometimes cause stability issues. Of course, it could be simply a matter of manually adjusting a few notches back from the current settings. Because of that, I would say that this function isn’t too useful and is more of a gimmick.

Just like many other motherboards, this one is also sensitive to RAM timings. I would recommend buying RAM at a local shop for faster turnaround in case it does not work.

Overall, this board is ideal for both AMD and NVIDIA fans, but unless USB 3.1 is a must-have for you, I would recommend the next board in our list (Gigabyte GA-Z97X-UD7) over this one. 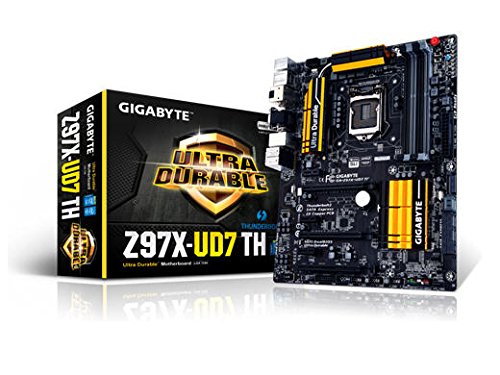 The Gigabyte GA-Z97X-UD7 motherboard might be a great choice if you are on a tight budget. Its unique feature is having two Thunderbolt2 ports, which are often found in Mac computers and in some industry-level storage devices.

However, this function isn’t important for PC gamers. The board also has 7.1 audio support, and the LAN input supports gigabit connections.

Thankfully, it is also a bit less sensitive to RAM timings than many others, making it easier to put in the appropriate RAM modules.

That being said, there are two minor issues with this board that are worth mentioning.

While this isn’t as important, there aren’t any additional plugs for LED lights. So if you have a case with a cool light or LED display, unfortunately, you can’t power it on this motherboard and will need a power supply that can support those.

If you are willing to compromise on the above features and in turn, get a cheaper, but still fairly high mid-range motherboard, the Gigabyte Thunderbolt 2 is a good choice to consider. 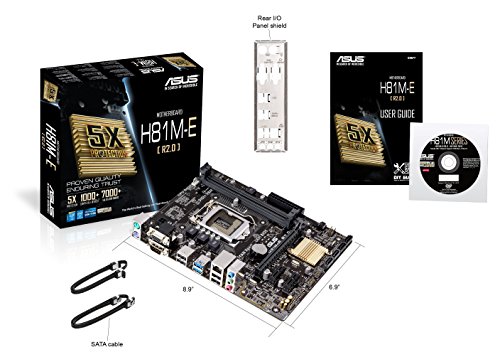 The MSI Intel H81 is a cheaper board, but it has a mATXa form factor and a bit older than the others. It also only features the H81 Express chipset which does not support dual graphics cards or CPU overclocking.

Keep in mind that this motherboard has a micro ATX form factor.

The board only has 1 PCIe 2.0 slot for the GPU. It also lacks in many other features when compared to the previous four by offering 2x 2 SATA3/2 slots, 2 RAM slots with a max capacity of 16 GB.

It doesn’t have USB 3.0 slots for the front panel, which might be an annoyance if you plan to use external HDDs or USB sticks to store games on.

The UEFI support is nice to have, and a newer firmware enables some overclocking capabilities, but the board will still not be able to utilize the “k” CPUs fully. These all mean that PCs built on this board aren’t too future-proof as you will most likely have to change this board to another in the longer term.

Why is the MSI Intel H81 motherboard on my list? I would only recommend this board if you are building a small unit and are a light gamer who is not expecting too much from your PC prefer older games.

As the 1150 socket is slowly becoming a thing of the past, if you want to take gaming more seriously, I would not recommend going for cheaper boards with fewer features.

If I had to choose just one of the boards in this review, the Gigabyte GA-Z97X-UD7 would be my top pick. This motherboard is an all-around good board for features and reliability, with a good price-to-value ratio. It’s quite future-proof with support for 32 GB RAM, Gigabit LAN, and PCIe 3.0 slots.

Is there an LGA 1150 motherboard that we missed that you think should be in this guide? Let us know in the comments below with your top pick and what hardware combo you would use with it.